WITH TOURS OF MATERA, ALBEROBELLO & POLIGNANO A MARE

We highly recommend booking this tour during the festival of St. Nicholas held in Bari on the 7th-9th of May.  This incredible festival is an experience not to be missed!

Bari has two souls: a contemporary one in the Borgo Murattiano, an orthogonal area built at the time of Napoleon occupation by Gioacchino Murat in the nineteenth century is the commercial hub of the city, with elegant boutiques and restaurants and a traditional soul in the old district (Bari Vecchia), overlooking the sea, which features a medieval Romanesque and Arabic look. In the past, it was chaotic and dangerous, almost off limits, but is now reborn thanks to an effective redevelopment effort. One thing has been consistent throughout Bari’s history: the religious devotion of the people of Bari toward the patron saint of the city, Saint Nicholas.

The Saint Nicolas Tour starts at the Basilica di San Nicola, founded in 1087 by the Benedictine abbot Elijah. It was originally used as a place to contain relics of the Saint found by sailors from Bari in Turkey. The sanctuary is a reference for its medieval architecture and has influenced numerous other buildings in the area. It is the most admirable example, as well as the prototype, of the sober Romanesque style from Puglia. It was built immediately after the arrival of the remains of St. Nicholas in Bari and consecrated in 1197. Large, solid and simple, it has a limestone facade flanked by two towers, the Torre del Catapano and the Torre delle Milizie. There is no lack of ornamental elements, a prime example is the “door of the Lions” which opens on the left side of the church. In the interior, one is struck by the area of the presbytery, well separated from the naves and, of course, the crypt, an environment in which architectural beauty (note the sail vault erected by 28 marble columns) comes with an amount of spirituality difficult to find elsewhere.

We will stop for lunch at a local restaurant  for a lovely mid-day pause and some of Puglia’s famous wine.  After lunch, the tour continues to the Russian Church of Bari, built by S. Wsievold Subbutin in Medieval Russian style and dedicated to Saint Nicholas. The group then moves on to the Provincial Art Gallery of Bari founded in 1928. There we’ll view the exhibit of Apulian art from the XI to the XIX centuries. Among the XIII century icons we find one depicting the life and miracles of Saint Nicholas. The Saint is again present in a XV century polyptych attributed to Bartolomeo Vivarini representing an aging bishop performing a miracle. Lastly we find a XVI century painting of Saint Nicholas calming stormy waters for sailors by the rococo artist Corrado Giaquinto.

DAY #2: VISITING MATERA, THE CULTURE CAPITAL OF EUROPE IN 2019 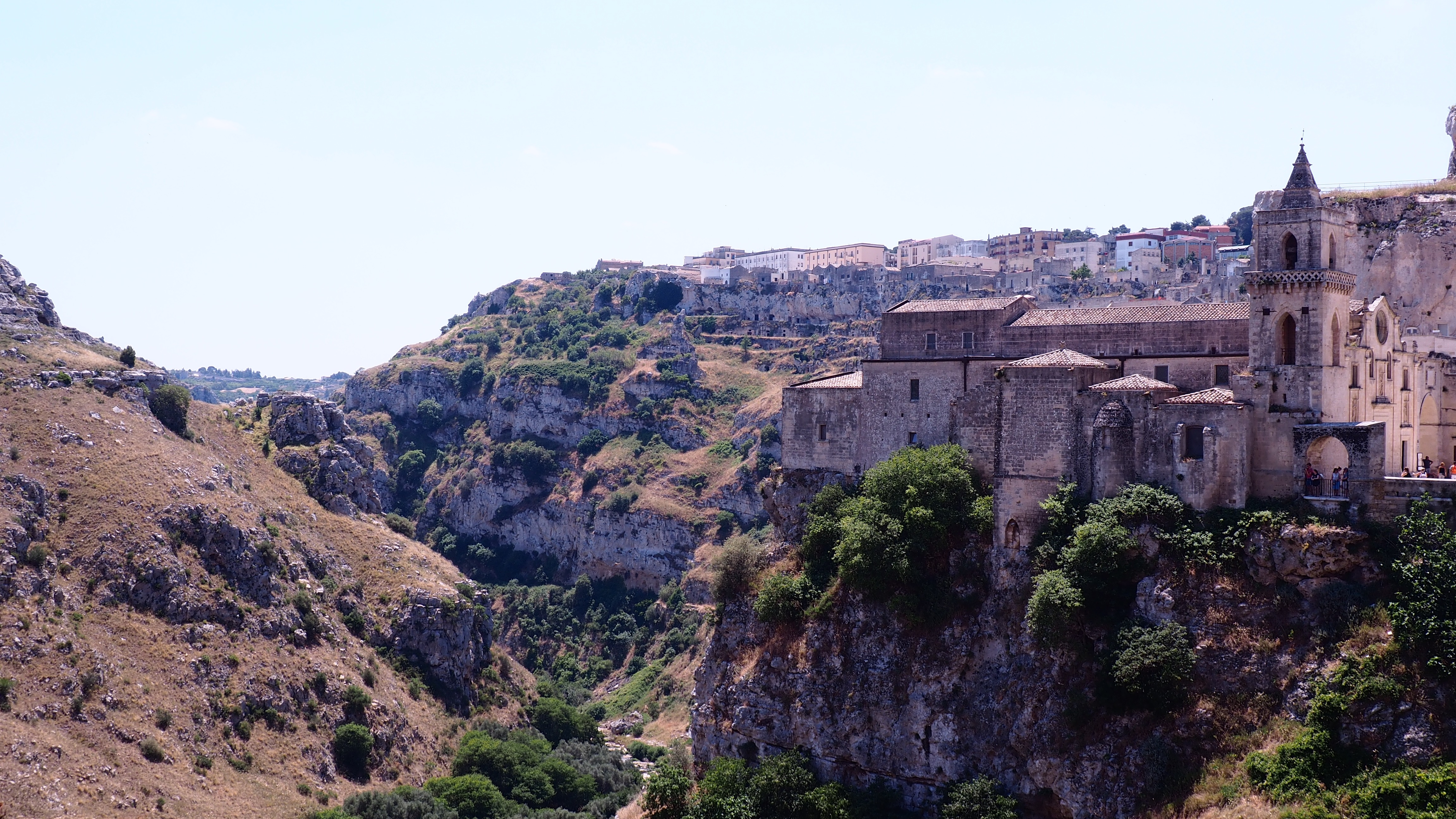 The following day, we’ll head to Matera in Basilicata, a UNESCO World Heritage Site and Culture Capital of Europe for 2019. This newly renovated city is bustling with life and history, dating back thousands of years, it has layers of stories to explore. We’ll begin our day enjoying a delicious lunch at Falco Grillaio, a local restaurant in the center square, a short walk from sweeping views of the old Sassi with ample outdoor seating for eating in the sunshine. In the afternoon we will take the walk to visit the breathtaking cave churches in the Sassi district, where medieval frescoes of Saint Nicholas can be admired. The first stop will be in San Nicola dei Greci, which together with that of Madonna delle Virtù, make up a fascinating 1Oth century cave complex.  The next stop will be the cave church of Santa Lucia alle Malve, IX century female Benedictine Sanctuary divided into three separate aisles that still bears remains of a XIV century fresco of Saint Nicholas as well as other frescoes. The last cave church of the itinerary, San Giovanni in Monterrone, is entirely carved out of the peak of a huge rocky outcrop, we find a XIV century Saint Nicholas depicted in the classic Oriental
version: dark complexion and white beard.

We’ll head to Alberobello, a Unesco World Heritage Site famed for its conical-shaped dwellings, built from limestone with roofs stacked of stone tiles without mortar. We'll stop for lunch at an award winning family-run restaurant, La Cantina, where the chef, Francesco, will prepare local dishes in his open air kitchen. In the afternoon we'll head to Polignano a Mare, a town famous for its breathtaking views of the Adriatic. It also happens to be the birthplace of the
Italian singer, Domenico Modugno famous for 'Volare'.

We accept bank transfers as well as online payment via credit card.

We highly recommend this tour for the Saint Nicholas Day, May 7th-9th, for the ultimate experience.  Between May 7th and 9th, in memory of the arrival of the saint's remains at the port, Bari celebrates the patron saint with a historical re-enactment that is nothing short of spectacular. If you are in the city, you cannot miss the ceremony in honor of St. Nicholas; it is simply impossible to do so, because a dense procession fills the streets of the old town up to the square of the basilica. If you want to feel like a local and experience the celebration of St. Nicholas, you’ll want to be there for these festivities! The statue of the saint is loaded onto two boats and left in the middle of the sea all day, then in the evening it is brought to land and carried in a procession. The moment is magical, you can see the expressions on the faces of the people: there are those who are moved, those who smile, those who pray, while all around the fireworks explode. In the next two days it's all one big party: concerts, folk dances, food stands. But it is on the last day that the apex is reached: a mass of pilgrims crowds to enter the crypt of the basilica, witness the exudation of the “manna” and earn one of the bottles of “holy liquid” (which, mixed with holy water, is said to heal wounds); it is a difficult task, but you can try to grab one, too!

The Real Story of Santa Claus

The real story of Santa Claus: Santa Claus has a white beard, a few extra pounds, and comes from the North Pole. Are you really sure? Sit down in your armchair, we'll tell you the history and legend of the most beloved grandfather by children the world over. Let's start with the amazing news: Santa Claus is St. Nicholas! Of course the information on the life of the saint is not plentiful, but this is what we know: he was born in Greece, and in the fourth century he was bishop of Myra, a small Roman city of present-day Turkey. A proud defender of the Christian religion, he spent many years in prison until the religion was authorized in 313 AD with the Edict of Milan issued by Constantine. He died in Myra
in 343 AD. Let's move on to legends. It seems that as a baby, on Wednesdays and Fridays, he drank milk only once a day, to respect the abstinence prescribed by the Christian Church. And then, what miracles he performed as a young man! He calmed down a storm during a journey to the Holy Land, resurrected three children torn to pieces and put in brine by an innkeeper, and freed a boy kidnapped by pirates and sold to a king. Thus his worship spread throughout the Byzantine Empire, soon reaching Italy. In May 1087, the people of Bari left for Myra, occupied by the Turks in the meantime, stole the remains of the saint and took them to Bari. Now the relics are jealously guarded in the crypt of the basilica erected in his honor. The theft had such a resonant echo that the name of Sanctus Nicolaus became Santa Claus in Northern Europe and North America, and his figure was transformed into that of the old man dressed in red and with the bag full of gifts that we all know!